The TW-E7B are Yamaha’s flagship truly wireless earbuds. Featuring 10mm drivers and aptX Adaptive support, the TW-E7B also include a range of other features, including active noise cancellation and transparency mode, a Listening Care feature to adjust sound at low volumes, listening optimizer mode for adjusting to your ears, and a low-latency Gaming mode. Priced at $280, the TW-E7B compete against the likes of the Sony WF-1000XM4, the Apple AirPods Pro, and the Samsung Galaxy Buds2 Pro.

The Yamaha TW-E7B have an interesting circular design with another circular shape attached to the side. The smaller circle looks like a button at first but is purely aesthetic.

The earbuds come in four colors, black, white, beige, and dark blue with brown accents. All four have a speckled finish on the outside. 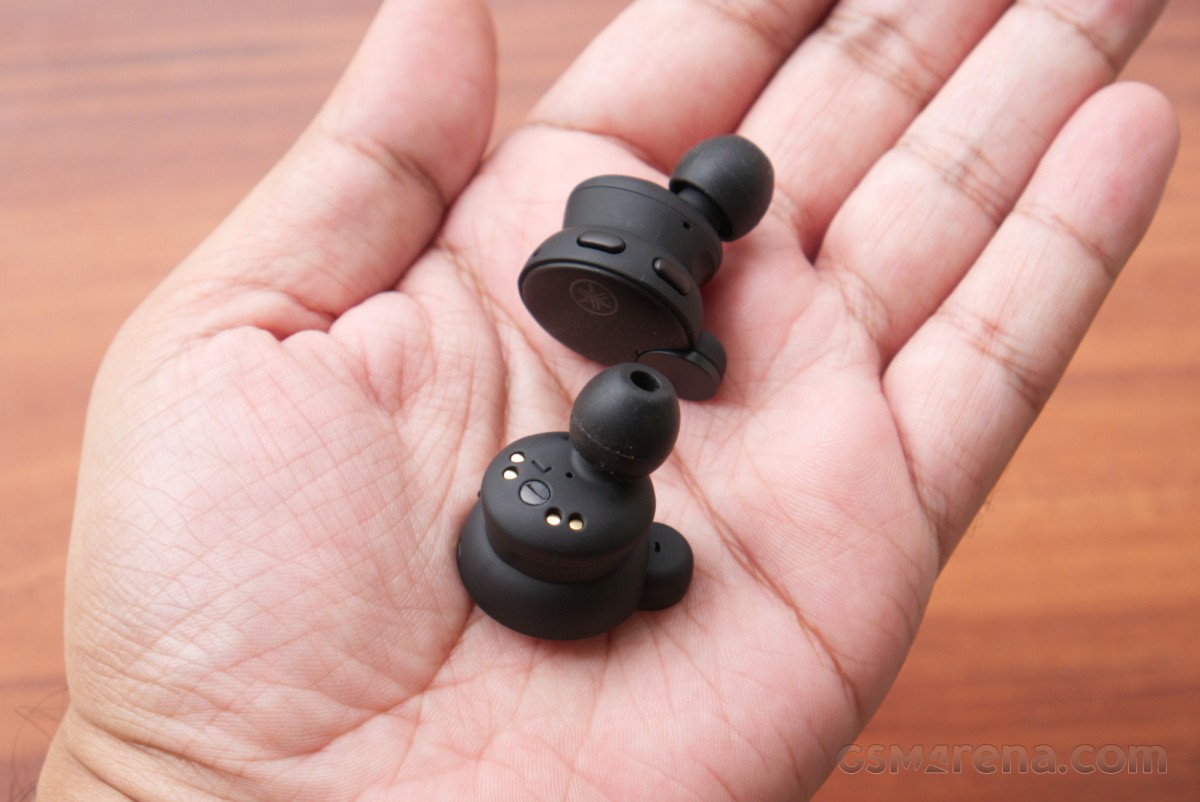 The TW-E7B have a rather chunky design with the ear tips sticking out. The tips are the only part of the earbuds that actually sit inside your ears, with almost all of it hanging out. Despite this, the earbuds don’t stick out too far from your ears.

The left earbud has a single button on the top to control playback and incoming calls. On the right are two buttons, which control the volume as well as skip tracks. The buttons are also used for initiating pairing or calling on the voice assistant. None of these functions are customizable.

The buttons are placed in a way that makes them easy to use. They are also generally more reliable and comfortable to use than tap gestures. It’s just that the buttons are a tad too clicky, which can be a bit loud in your ears. 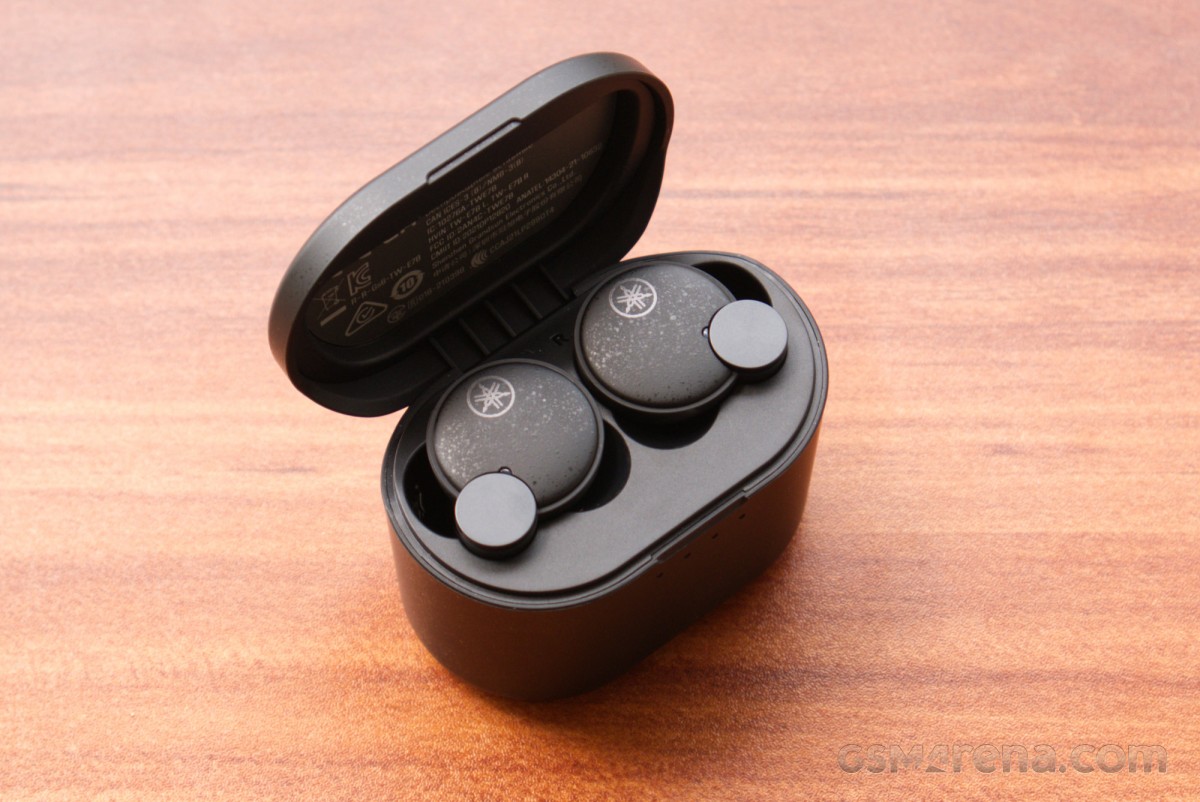 The case design is pretty standard, with a slim lid on top. The shape and color of the case make it rather difficult to tell which way it’s facing and more often than not you’d be trying to open it from the back. The lid is also very thin and has very little lip to open comfortably. On the front are four LEDs, which indicate charging status but are far too bright. The case has the same speckled finish as the earbuds.

The overall finish and build quality of the earbuds and the case is good but not necessarily super premium or noteworthy. The earbuds are IPX5 water-resistant but the case is not.

The Yamaha TW-E7B were very comfortable during my testing. The earbuds attach to your ears at just one point through the ear tips, so there’s no pressure on any other part of your ears to cause discomfort. You can literally wear them for hours and not even notice them. 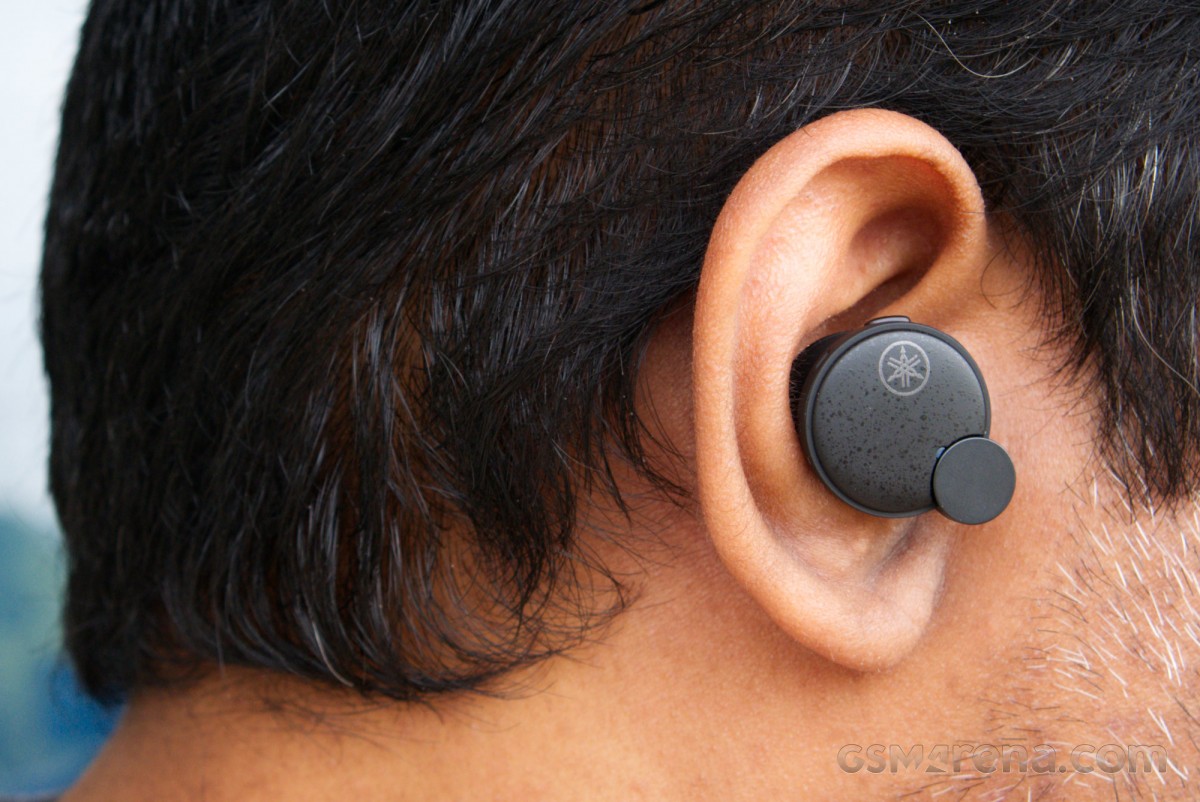 The only problem with this design is that it creates a pendulum effect with the mass hanging out of your ears. As you walk, particularly barefoot, it sends shocks through your spine, which in turn causes the earbuds to vibrate, sending small thuds through your ears. This isn’t really much noticeable when something is playing or if you are wearing shoes but can be heard if you are walking barefoot with nothing playing.

One side effect of the earbuds being so chunky is that they are delightful to pull out of the case and place inside your ears. A lot of TWS earbuds these days have diminutive shapes that sink entirely inside your ears (like the Pixel Buds Pro), which leaves very little surface area for you to grab on to while inserting or removing the buds. There’s no such problem on the TW-E7B, which can be grabbed by all five fingers while wearing.

The TW-E7B are compatible with Yamaha’s Headphone Control app, available on iOS and Android. The app lets you adjust audio features, ANC, and update the firmware.

Through the app, you can control the EQ, which includes five-band adjustments. There is no frequency labeling, so you just have to fly by the seat of your pants while adjusting. There are five presets available with two custom slots. 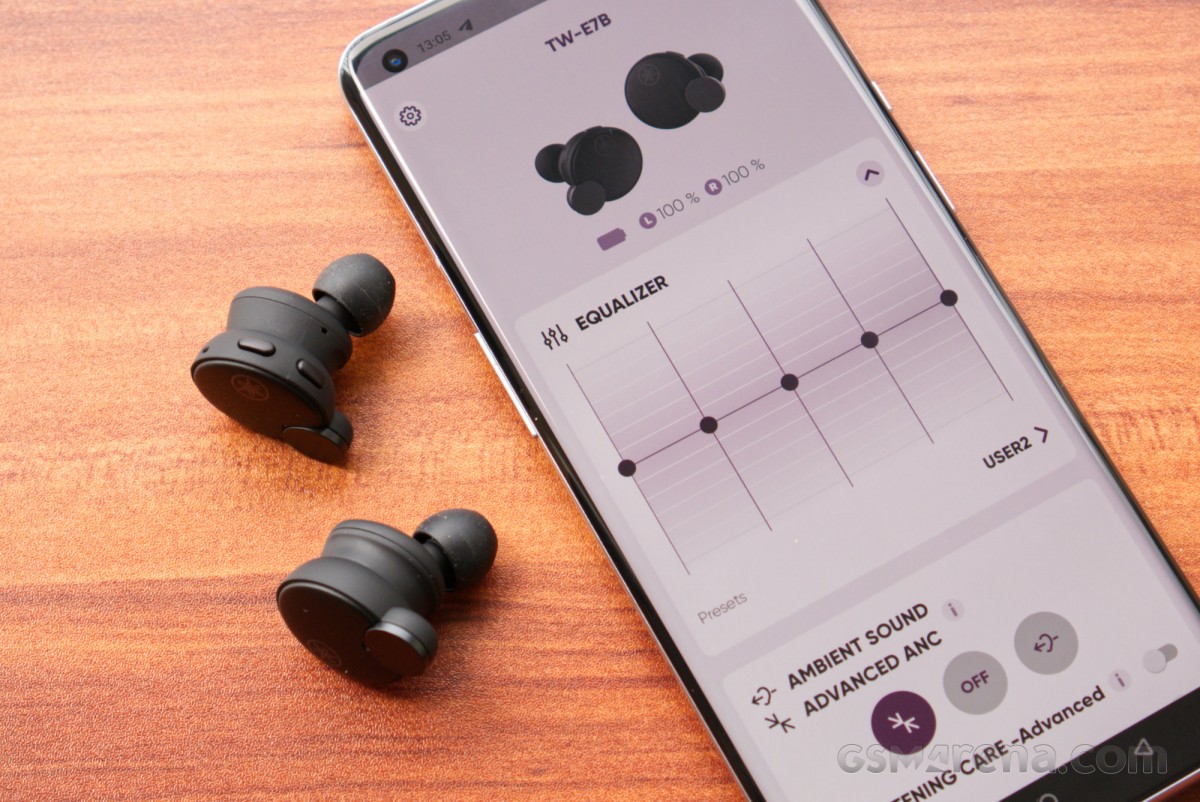 There are two more audio options available here. Listening Care automatically adjusts the sound at lower volumes so things like bass frequencies sound fuller. The Listening Optimizer feature uses the internal microphones on the earbuds to monitor the sound and adjust it to your ears and ambient noise on the fly.

You can also enable or disable the ANC or turn on the transparency mode, called Ambient Sound here.

A game mode has also been included, which claims to reduce latency.

Through the menus, you can also choose options to adjust the power off time and update the firmware.

The app has a few issues. Every time it is launched afresh, it has to be manually connected to the earbuds even if the earbuds are already paired. Changing some of the audio options also causes an annoying popping sound. Lastly, the app simply did not work on iOS; even though the earbuds paired just fine, the app would not connect to them and kept saying “pairing failed”.

The Yamaha TW-E7B feature single 10mm, dynamic drivers. They support SBC, AAC, and aptX Adaptive codecs with Bluetooth 5.2 connectivity, although there is no multi-device pairing support.

The TW-E7B have a warm-leaning sound. The bass frequencies have generous sub-bass and mid-bass boost applied, which adds a fair bit of color to the sound despite Yamaha’s claims of authentic sound. To its credit, the tuning is more reserved compared to what you find in most other earbuds on the market, and the bass never gets overbearing. There is a hint of bloat on bass-heavy tracks but it doesn’t get distracting.

The mid-frequencies are generally well handled. The lower midrange is full-bodied and generous, lending good timbral characteristics to male vocals and percussion instruments. 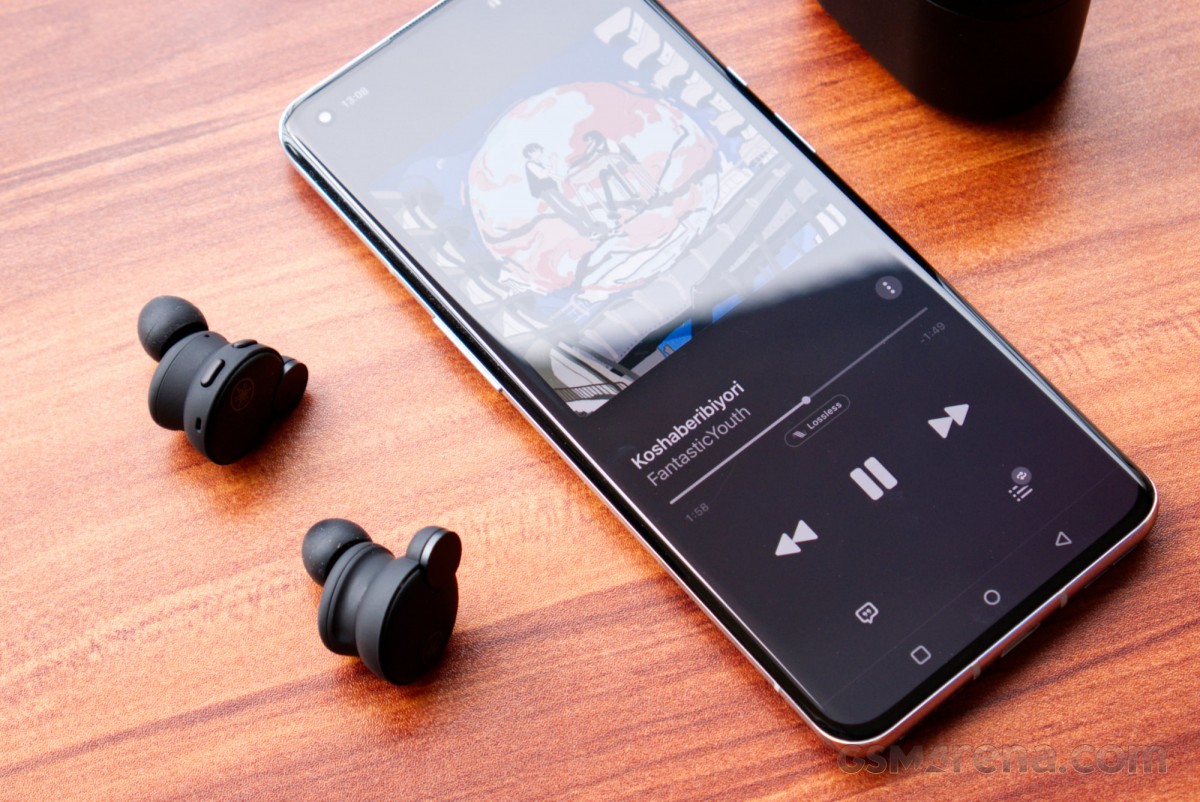 Unfortunately, things go off the rails a bit in the upper mid-range, which is rather aggressive at times. Electronic music can be quite harsh, string instruments very forward, and certain female vocals can be ear-splitting and overly nasal.

Things trail off a bit beyond that, as the treble region is underrepresented. This creates a somewhat obfuscated and duller sound in certain parts of the frequency range. The treble is a bit uneven, however, so some frequencies come out fine while the others are notably quiet.

Despite these shortcomings, the overall sound from the TW-E7B can be quite enjoyable. The sound lacks consistency across the frequency range but still works reasonably well across a wide genre of music. Depending on the recording, it can sound a bit v-shaped or just warm. The EQ helps iron out some of the deficiencies in the frequency response but needed a few more bands (with labeling) to get better results.

Technical performance is good. The sound comes across as reasonably detailed at times, no doubt helped by the general accentuation of the upper midrange. Imaging is also decent with a so-so soundstage.

The TW-E7B have mixed microphone performance. Voices sound natural and clear but are quiet and require you to speak up. Background noise suppression is also unimpressive and you hear a fair bit of it on the other end.

The TW-E7B have poor active noise cancellation. Enabling the feature mostly gets rid of the low-end rumble in the background. The only attenuation of the mid and high frequencies come from the passive isolation of the ear tips, with the ANC feature making no difference in this range.

Attempting to use these earbuds on a flight provided subpar results, with only a slight improvement in the background noise isolation compared to using earbuds with no ANC at all. I would still leave the feature on to get rid of some of the background thrum and rumble but that’s about all one can expect from these. 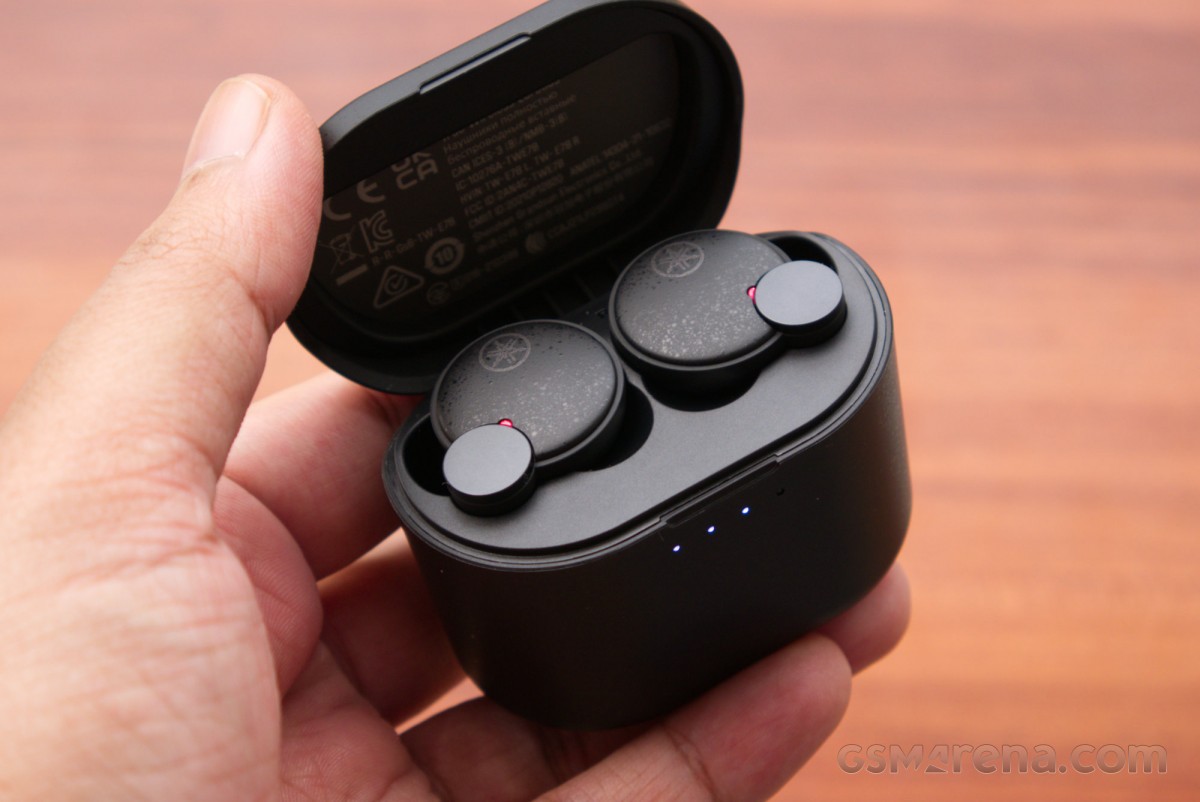 The transparency or Ambient Sound mode is similarly underwhelming. It will let outside sound in but the sound is very artificial. It is not concerned with sounding natural as on the AirPods Pro but rather just accentuating parts of the sounds around you so you can hear them clearly. This means it’s usable if you just want to briefly hear something around you but it’s not suitable for being left enabled.

The TW-E7B have good latency performance. When testing with AAC on an iPhone, video playback latency was exceptional, with no noticeable delay in the video and audio. aptX Adaptive was oddly a bit slower on Android, with noticeably but still overall low delay. It would also slip out of sync at times on Android but was rock solid on the iPhone.

The TW-E7B had great connectivity performance. There were no dropouts or connection issues when testing with an Android phone or an iPhone. The aforementioned pairing issue on iPhone was also an issue with just the app as the earbuds otherwise worked fine with the phone.

The TW-E7B have a claimed battery life of 6 hours with ANC enabled for audio playback. Yamaha’s claim is right on the money here, as the TW-E7B lasted for exactly 6 hours during my testing with ANC enabled and using aptX Adaptive.

Even at the currently discounted price of $250, the Yamaha TW-E7B are a tough sell. They have good audio quality, good comfort, decent battery life, and good design. However, the ANC performance leaves a lot to be desired, which in this price range is a cardinal sin, especially considering the pedigree of the competition. Besides, most of them also have good audio quality, so Yamaha isn’t breaking any new ground here. 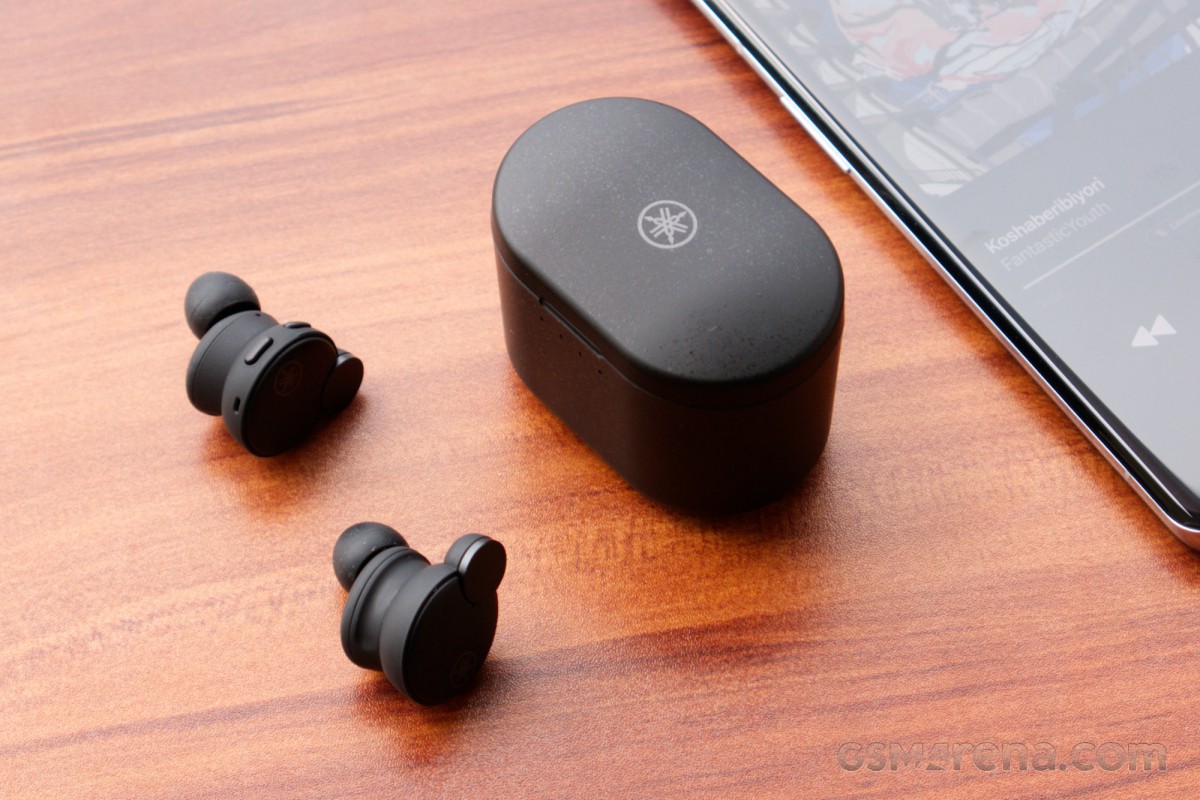 At about $100 less, the TW-E7B could perhaps make a case for themselves based on their attributes, particularly the audio performance. However, at the current pricing, they cannot be recommended over more accomplished rivals.

Brace Yourselves, The Mario Movie Will Have Toad Sing