Motorola confirms initial batch of phones to get Android 13 update


Android 13 was officially launched earlier this week and Android makers are already confirming devices that will receive the update. Motorola has joined the party with a list of ten devices that are scheduled to get Android 13. No actual dates for the updates were provided as of now. 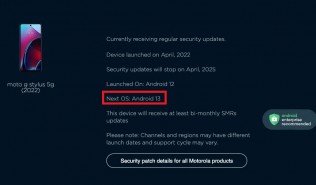 For a more detailed report on the new features in Android 13, check out our announcement coverage here.

Special thanks to Sasa for the tip!