The Huawei nova 9 Pro unveiled last September will soon get a successor as the company is expected to announce the nova 10 series next month. And while we await more details about the nova 10 lineup from Huawei, live images and renders of the nova 10 Pro have surfaced, revealing the smartphone’s design and a few key specs.

Let’s check out the live image first – shared by Chinese tipster WHYLAB on their Weibo account – which reveals the Huawei nova 10 Pro has a triple camera setup on the back, headlined by a 50MP RYYB camera. The design of the camera island is also quite interesting. It’s surrounded by a black-colored plate with camera specs written on it, while the middle camera is encircled by a golden ring.

The black-colored back cover has a glittery design and sports the Huawei logo and nova branding at the bottom. There’s one more color option, which can be seen in the picture of an advertisement banner below. It shows the Huawei nova 10 Pro has a curved screen on the front with a pill-shaped hole in the top-left corner for two cameras, while the camera island is now surrounded by a golden plate.

The accompanying text says the Huawei nova 10 Pro supports 100W charging and either a 50MP or a 60MP selfie shooter. The image is unclear, so we can’t be certain about the resolution.

These pictures reveal the nova 10 Pro’s design, but they aren’t clear. Thankfully, OnLeaks has us covered since he leaked a bunch of high-res nova 10 Pro renders, showing the smartphone in black and silver colors while giving us a look at it from different angles. 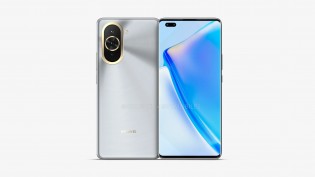 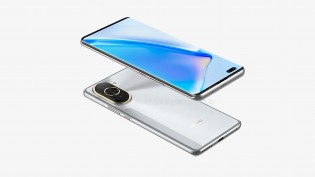 The nova 10 Pro’s design in these renders matches the one seen in live images, except the former have the nova branding above the Huawei logo missing. 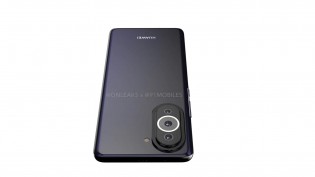 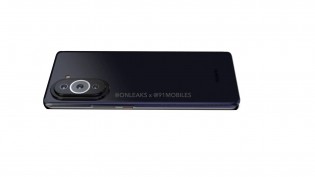 The source says that the Huawei nova 10 Pro will pack a 6.7″ screen with a fingerprint reader underneath for biometric authentication. The smartphone will measure 164.3 x 73.6 x 8.1mm, but we don’t know how much it will weigh.