Honor has built a name for itself in the laptop market with sleek and powerful laptops that undercut many of the established players and its latest attempt is the MagicBook 14 2022. It brings a redesigned chassis, 12-gen Intel CPU, a 75Wh battery and an optional Nvidia RTX 2050 discrete GPU.

MagicBook 14 2022 was initially announced in China with AMD’s Ryzen 6000 CPUs and no discrete GPU options. Luckily for us, we got the international variant, which just launched more recently and it’s the top spec’d model with the discrete graphics card.

Honor is touting this laptop as a one-size-fits-all – suitable for work and gaming but is that really the case and should this be on your shortlist for a new laptop in 2022? This reviewer spent nearly two weeks with the MagicBook 14 2022 and used it for work and play to see just how well it holds up.

Honor MagicBook 14 is a sleek aluminum unibody laptop measuring just under 17mm at its thickest point and weighing in at 1.58kg. Carrying the laptop in a backpack on your daily commute or from one room to another is easy enough and won’t leave your arms tired. The machined aluminum alloy chassis is cold to the touch and feels solid. The laptop is offered in a Single Space Gray color, which looks quite stealthy though it’s prone to picking up smudges.

MagicBook 14’s 14.2-inch display is of the a-Si TFT LCD variety which is an older more affordable alternative to the LTPS LCD and AMOLED screens in more recent premium laptops. The resolution here is 1440 x 2160px, while the refresh rate is just 60Hz. Having used laptops with high refresh rate screens, you do notice the difference though the 60Hz panel should result in better battery endurance. 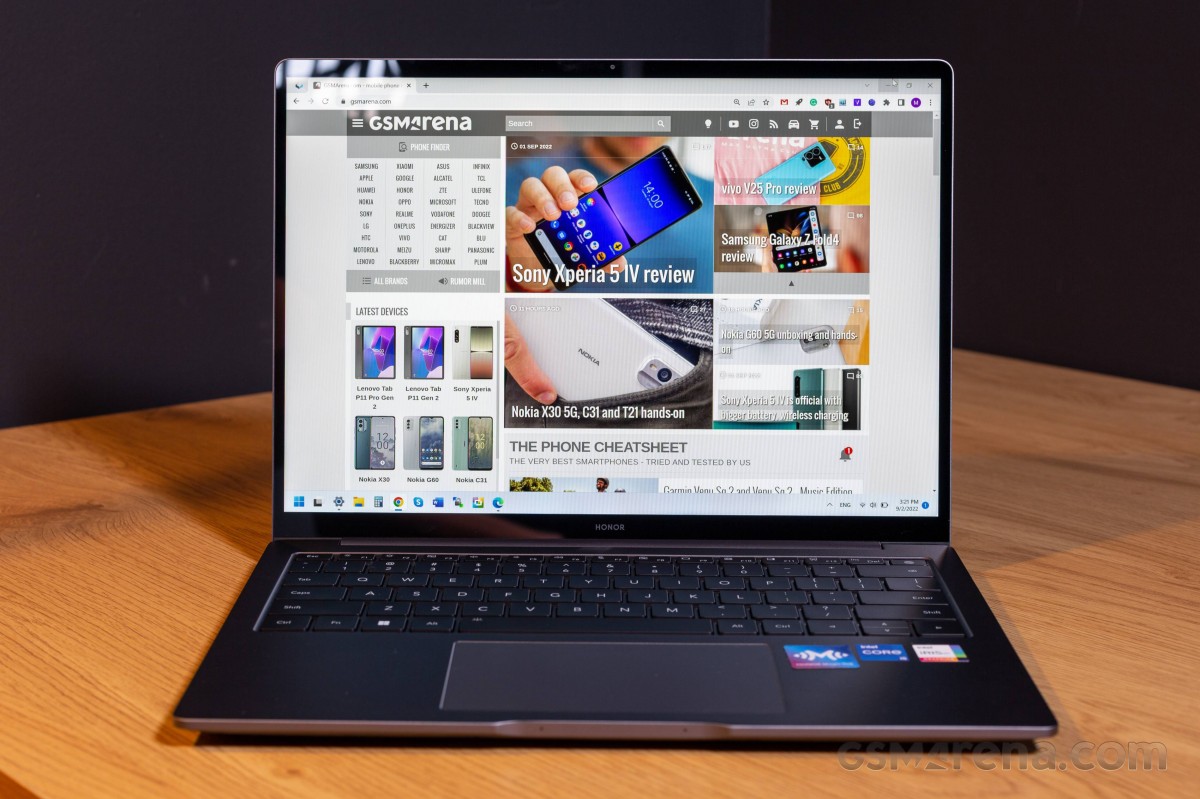 As with a lot of recently announced laptops, MagicBook 14 2022 gets a 3:2 aspect ratio screen which is great for productivity and multitasking but leaves videos with large black bars compared to 16:9 screens. The display is protected by Corning Gorilla Glass Victus.

Honor claims 300 nits of brightness on the panel while we measured 347 nits of peak brightness with our specialist gear. Brightness above 300 nits is solid for in-door use though far from class-leading laptops that can crank out 500 nits or more. Viewing angles are not great on this panel with noticeable shifts in contrast when looking from the sides.

Outdoor visibility is not great on the glossy screen. The display is rated at 100% sRGB coverage. The panel has a 145-degree opening angle and you can open and close the lid with just one hand – not a key selling factor but a premium laptop mark nonetheless. 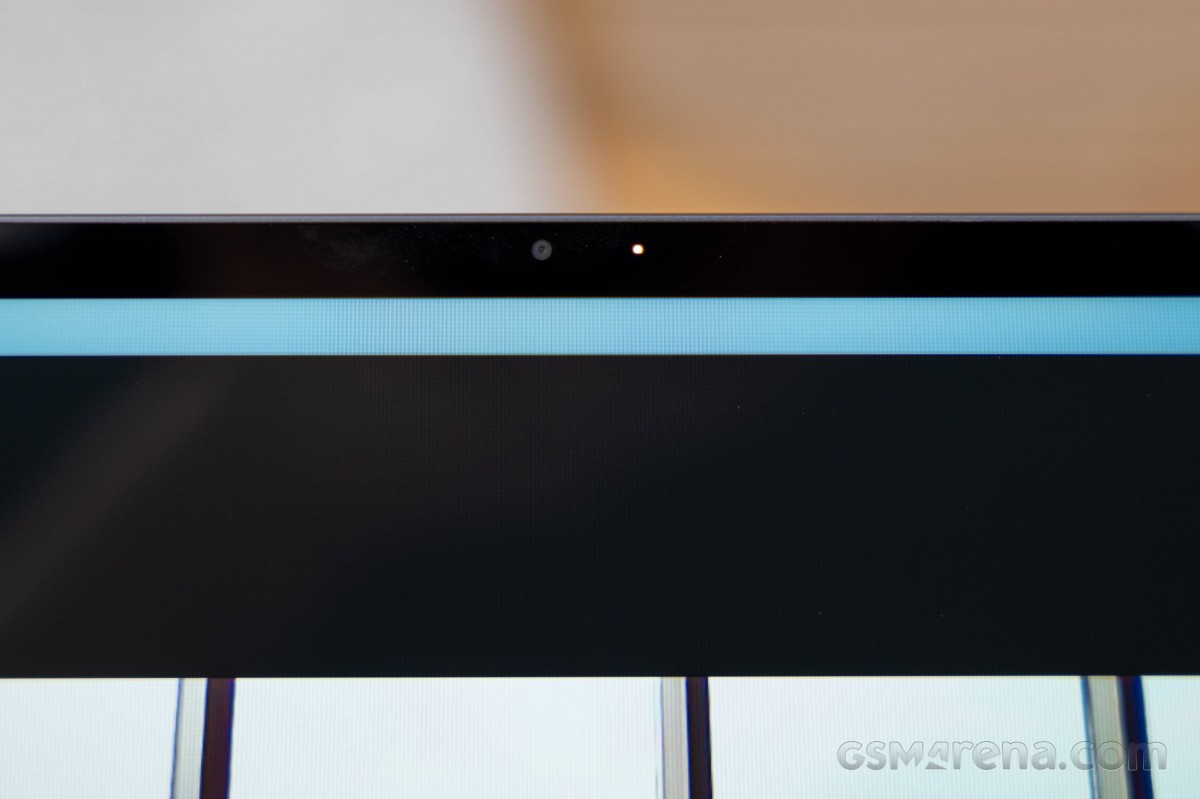 Honor also added a pretty average 720P HD camera for video calls and the good news is that it now resides in the top part of the display bezel, unlike the previous MagicBook 14, which had the camera hidden under a keycap. The port selection is solid with two USB-C ports of the 3.2 Gen2 variety on the left-hand side alongside a 3.5mm headphone/mic combo jack. The opposite side has a USB-A 3.2 Gen1 port and an HDMI out. 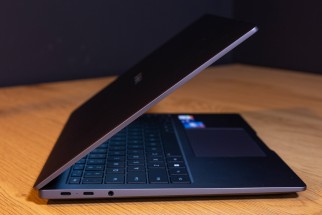 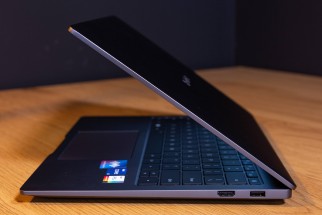 The laptop packs two microphones and two bottom-firing speakers. The speakers get plenty loud though their positioning is not ideal and you do lose out on clarity. There’s a fingerprint reader embedded in the power button for secure logins while connectivity is handled by Bluetooth 5.2 and Wi-Fi 6. The software side is handled by Microsoft’s Windows 11 Home edition.

MagicBook 14 comes with a backlight QWERTY keyboard. It provides good typing experience with its 1.5mm key travel and the keycaps feature a resin coating that’s less prone to oily fingertips. 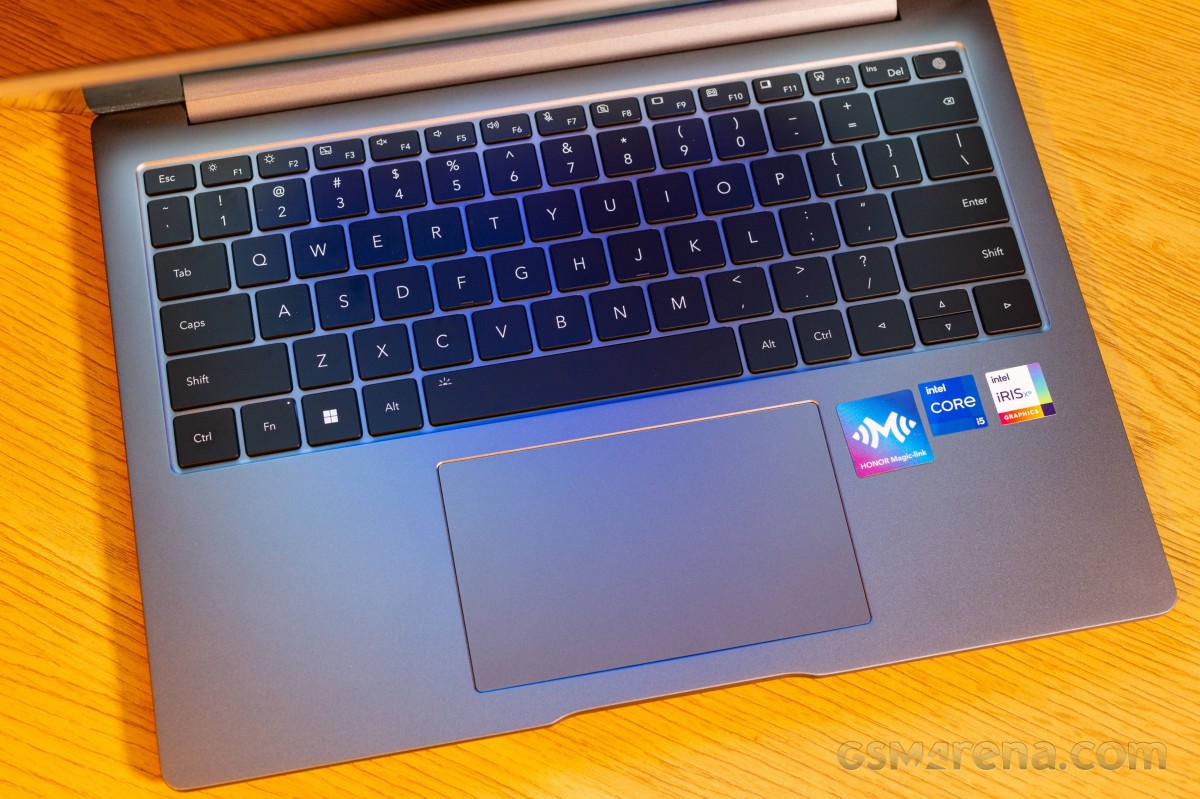 The only downside as with most other similarly sized laptops is the narrow arrow keys, which I continuously misspressed. The plastic trackpad is decently sized and all gestures work as expected.

The international variants of the Honor MagicBook 14 2022 come with Intel i5-12500H processors based on the Alder Lake architecture. You get 16 threads with 4 performance cores that support Hyper-Threading and 8 power-efficient cores. All twelve cores share the 18MB L3 cache. The base clock on the performance cluster ranges from 2.5GHz to 4.5GHz while the efficiency cores dial back between 1.8GHz and 3.3Ghz. The TDP is rated at 45W. 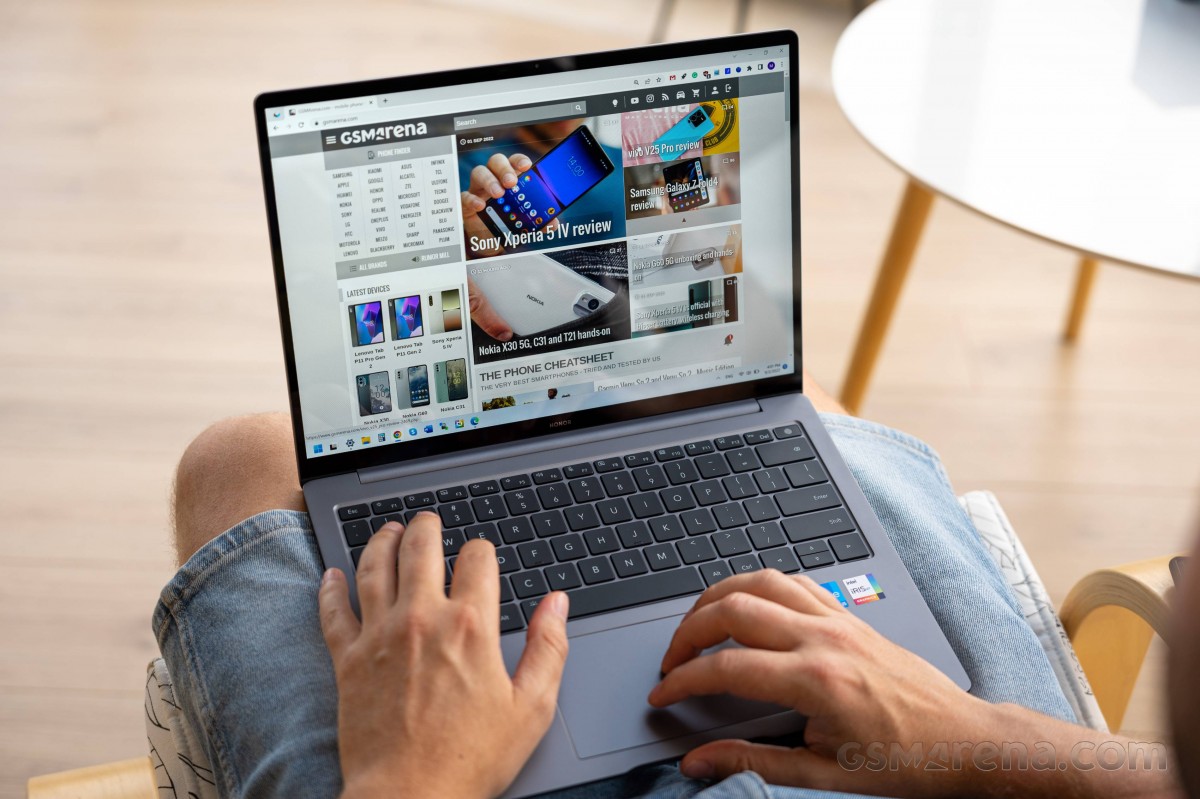 The laptop has a default 50W “Smart mode” that helps preserve battery life which should handle most daily tasks. The 70W “Performance mode” is a quick Fn+P keyboard combo away though you’ll need to be plugged into the power supply to use it. We used the Performance mode for our benchmark tests.

Honor also has its system-level performance and power consumption optimization called OS Turbo. It identifies specific usage scenarios and tunes the system to balance performance and power consumption. Honor claims OS Turbo can increase your daily work battery life by about 20%. You can also use the Honor Connect and Honor Share which allows you to link and mirror your Honor phone or tablet and transfer files seamlessly across devices. 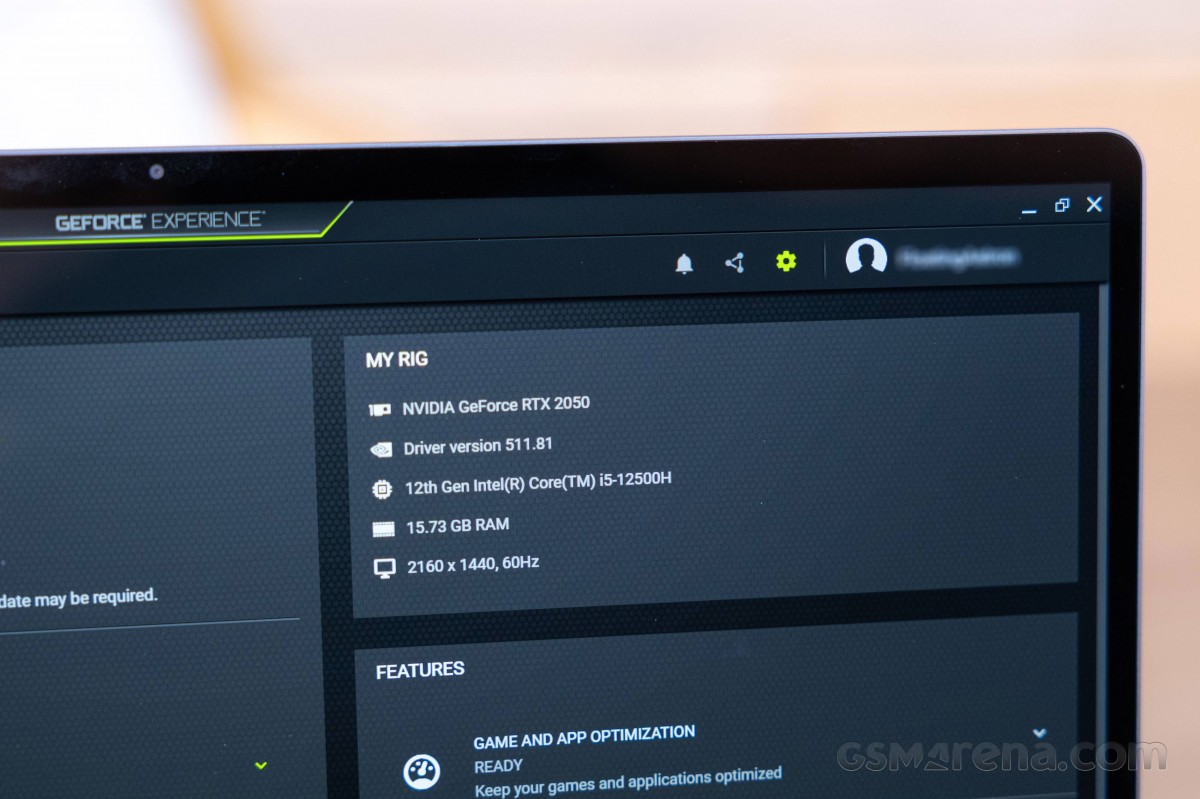 Our review unit also comes with the NVIDIA GeForce RTX 2050 discrete graphics card with 4GB GDDR6 video memory and a 60W power envelope. It’s a mid-range graphics card for laptops supporting DirectX 12 and OpenGL 4.6 though it only comes alive during gaming or video editing – everything else is handled by the built-in Intel Iris Xe graphics unit.

With the hardware overview out of the way, let’s examine some benchmark scores.

Geekbench 5 reveals a 1,630-point single-core score and 10,033 points on the multi-core test. We can see a minor improvement in the single-core department compared to last year’s MagicBook 14 which we tested with Intel’s 11th Gen Core i7-1165G7 chipset. 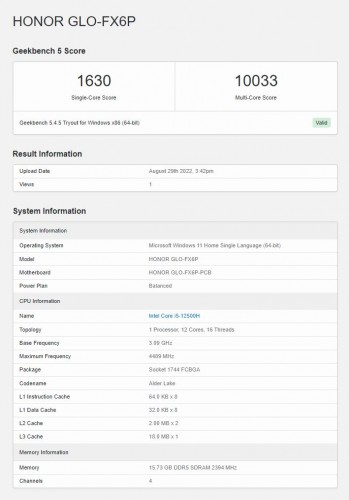 Having a discrete graphics card sure does help in more demanding tasks. We tested the RTX 2050 GPU in GFXBench 5.0 under DirectX 12 and Vulkan modes. The Aztec Ruins test showed better performance under Vulkan with a solid 130fps in the High Tier mode. The DirectX 12 mode got us 100fps in the High Tier option which is still equally impressive for a laptop of this size and weight.

You can expect to play AAA games in mid-to-high settings with this setup as well as edit 4K videos and other creative work in apps like Photoshop with plenty of layers. We also tested out a few games to see how the laptop would perform and it managed up to do 160fps at native resolution in Rocket League. Obviously the screen only does 60Hz, so anything above that is wasted. 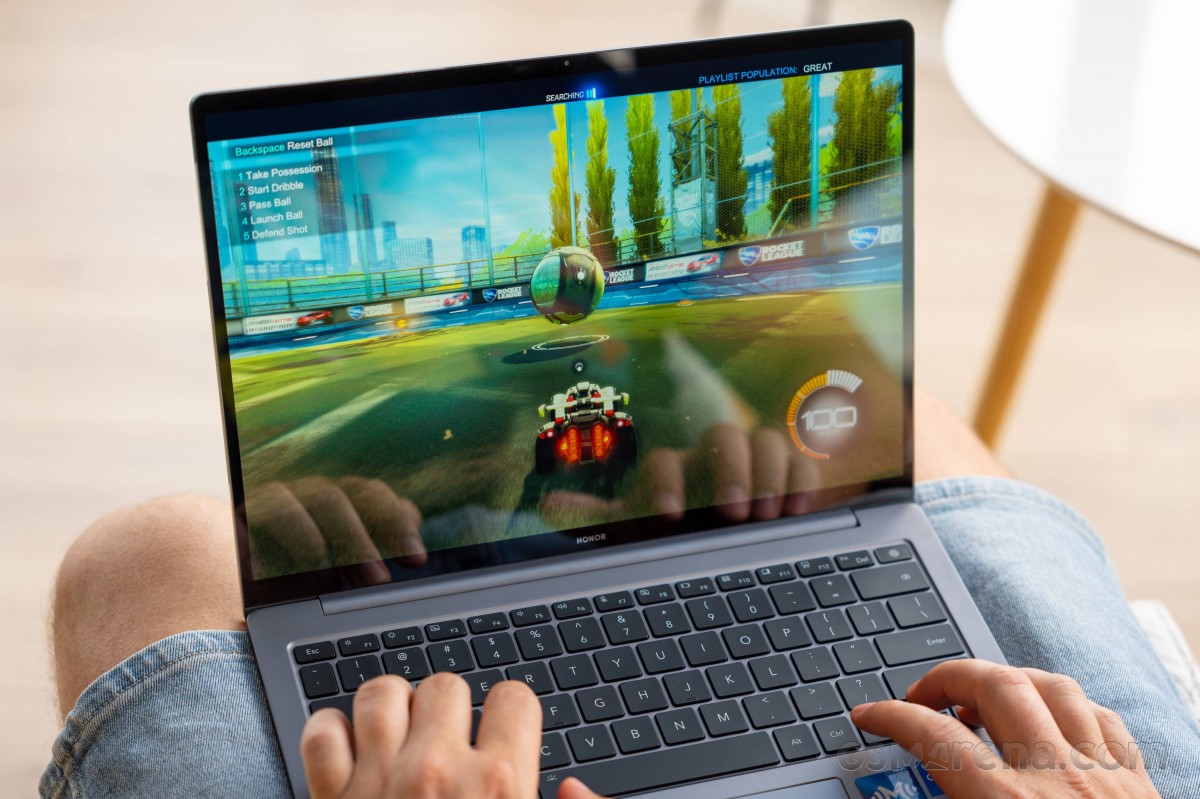 MagicBook 14 2022 comes with 16GB dual channel LPDDR5 RAM and a 512GB Samsung PCIe 4.0 NVMe SSD. Sequential read speeds hit over 6,700 MB/s while write performance is just over 4,800 MB/s – needless to say this is some speedy storage. A cold boot takes just under 8 seconds. 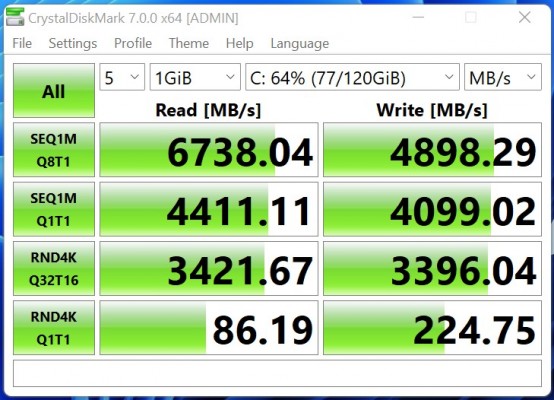 The cooling setup on the MagicBook consists of dual fans and a dual-horned heat sink. The laptop runs at 32-3°C in idle mode and the fans are quiet at around 20dB. 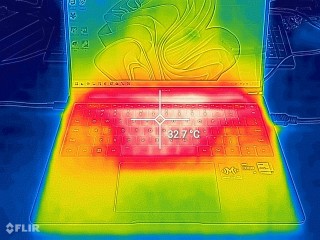 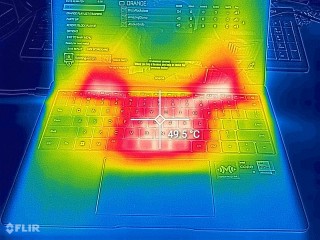 MagicBook 14 2022 in idle mode and under stress

Games and benchmarks ran under the performance mode made the laptop as hot as 49°C and the decibel levels rose accordingly.

Honor packed an impressive 75Wh lithium polymer battery in its MagicBook 14 2022 which is among the larger cells we’ve seen in 14-inch laptops. Honor claims 15 hours of 1080p local video playback and 10.5 hours of mixed use.

In our web browser stress test, MagicBook 14 2022 managed 14 hours and 20 minutes with the screen set to 50% brightness. This is among the highest scores we’ve seen from a laptop this size and is a testament to the improved efficiency of Intel’s 12th gen chipsets. We also ran a YouTube playback test (1080p video) over Chrome with brightness and volume both set at 50% and we got exactly 7 hours before the battery was depleted. 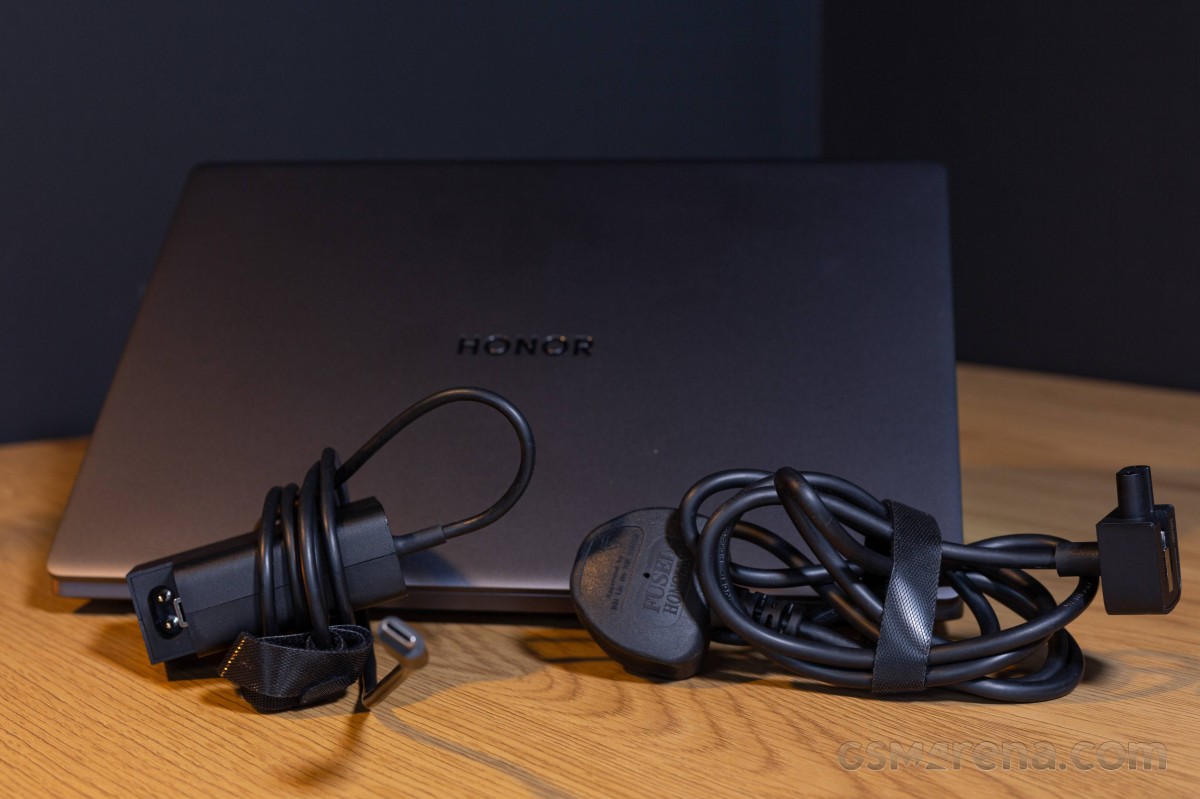 Honor really nailed the battery endurance here and we can safely assume most users will be able to get a whole day’s worth of office work out of this machine without needing to top up. The laptop comes with a 135W USB-C SuperCharger which is a bit bulky but it manages a full charge in just 80 minutes. You can charge from either of the two USB-C ports on the laptop.

There aren’t that many 14-inch laptops with similar specs and the ones that are available cost more. We found Lenovo’s IdeaPad 5i Pro 14 for €1,399 and the HP Pavilion Plus 14 for an even steeper €1,649 as two main alternatives.

Performance on the MagicBook 14 is among the best in the segment, the battery holds up, the build is solid and there’s a decent amount of ports. We can’t overlook the sub-par screen and speakers which are a step below competing high-end ultrabooks of this class. 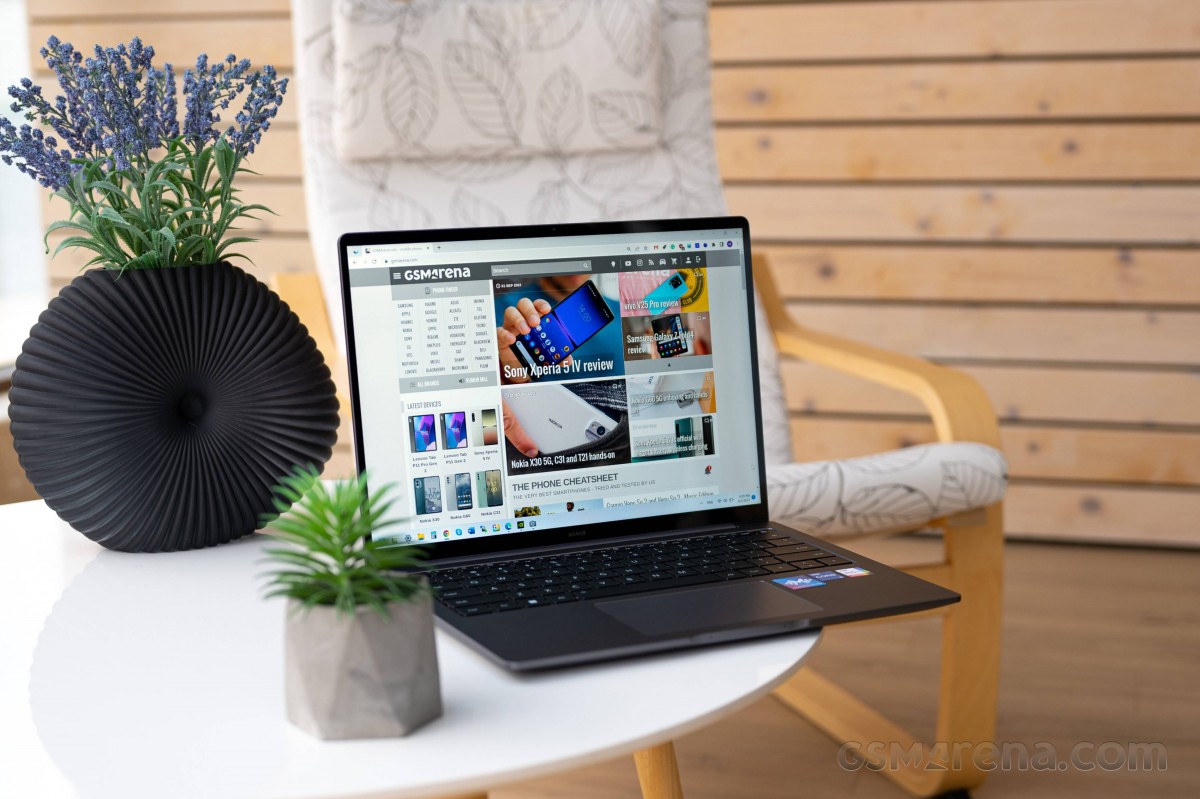 Slideshow: The shortlisted photographs for the 2022 Weather Photographer of the Year contest